Inspiring travel stories to get you dreaming of Asia
22609
post-template-default,single,single-post,postid-22609,single-format-standard,theme-hazel,hazel-core-1.0.7,woocommerce-no-js,ajax_fade,page_not_loaded,,select-theme-ver-4.6,wpb-js-composer js-comp-ver-6.8.0,vc_responsive,elementor-default,elementor-kit-23660,aa-prefix-lingo-,aa-disabled-all

Inspiring travel stories to get you dreaming of Asia

Inspiring travel stories to get you dreaming of Asia

Are you looking for travel inspiration? Do you love travelling in Asia as much as me?

To help me live vicariously and plan my next adventures, I seek out books to read about other peoples experiences living and travelling in Asia. I could read these types of books endlessly!

Many of the books below you may not have heard of. Many are by women and many by Australian authors.

Many of these books have inspired my love of travel, adventure and exploration in Asia.

Have you got any standout books that have left an impression on you?

What inspires you to travel and explore?

In her twenties, journalist Sarah Macdonald backpacked around India and came away with a lasting impression of heat, pollution and poverty. So when an airport beggar read her palm and told her she would return to India—and for love—she screamed, “Never!” and gave the country, and him, the finger. But eleven years later, the prophecy comes true.
When the love of Sarah’s life is posted to India, she quits her dream job to move to the most polluted city on earth, New Delhi. For Sarah this seems like the ultimate sacrifice for love, and it almost kills her, literally. Just settled, she falls dangerously ill with double pneumonia, an experience that compels her to face some serious questions about her own fragile mortality and inner spiritual void. “I must find peace in the only place possible in India,” she concludes. “Within.” Thus begins her journey of discovery through India in search of the meaning of life and death. Holy Cow is Macdonald’s often hilarious chronicle of her adventures in a land of chaos and contradiction, of encounters with Hinduism, Islam and Jainism, Sufis, Sikhs, Parsis and Christians and a kaleidoscope of yogis, swamis and Bollywood stars.
From spiritual retreats and crumbling nirvanas to war zones and New Delhi nightclubs, it is a journey that only a woman on a mission to save her soul, her love life—and her sanity—can survive.

Hello Missus: A Girl’s Own Guide to Foreign Affairs

Hello Missus: A Girl’s Own Guide to Foreign Affairs 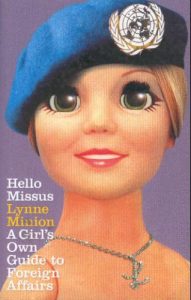 Lynne Minion’s debut peacekeeping mission ended up with her working as the only international advisor in the office of the Prime Minister, Mari Alkatiri. This book documents the behind-the-scenes events in the first year of East Timor’s democracy and sheds light on the personalities involved in making history.

On the Trail of Genghis Khan: An epic journey through the land of the nomads

In June 2004 Tim set off on an epic journey, 10,000km from Mongolia to Hungary by Horse – a journey that eventually took him more than three years and led him on a deep journey into the fabric of nomad society on the Eurasian steppe. 137 hours of film, and 4 years of book writing later, his experience can now be seen in a documentary series titled ‘The Trail of Genghis Khan‘ (released 2010),  as well as this book.

From horse-riding novice to spending months in the saddle, he learnt to fend off wolves and would-be horse-thieves, and grapple with the haunting extremes of the steppe as he crossed sub-zero plateaux, the scorching deserts of Kazakhstan and the high-mountain passes of the Carpathians. As he travelled he formed a close bond with his horses and especially his dog Tigon, and encountered essential hospitality – the linchpin of human survival on the steppe – from those he met along the way.

In 2012 I got to meet and hear from Tim Cope all about his adventures. Tim’s openness to risk taking and the love of a challenge is something that stayed with me after his presentation.

Dreaming in Chinese: Mandarin Lessons in Life, Love and Language

Deborah Fallows has spent much of her life learning languages and travelling around the world. But nothing prepared her for the surprises of learning Mandarin, China’s most common language, or the intensity of living in Shanghai and Beijing. Over time, she realized that her struggles and triumphs in studying the language of her adopted home provided small clues to deciphering the behaviour and habits of its people, and its culture’s conundrums. As her skill with Mandarin increased, bits of the language—a word, a phrase, an oddity of grammar—became windows into understanding romance, humour, protocol, relationships, and the overflowing humanity of modern China.

She learned that English speakers’ trouble with hearing or saying tones—the variations in inflection that can change a word’s meaning—is matched by Chinese speakers’ inability not to hear tones, or to even take a guess at understanding what might have been meant when foreigners misuse them.

In sharing what she discovered about Mandarin, and how those discoveries helped her understand a culture that had at first seemed impenetrable, Deborah Fallows’s Dreaming in Chinese opens up China to Westerners more completely, perhaps, than it has ever been before.

Jonathan Harley knew that becoming the ABC’s man in South Asia at the age of only twenty-eight was a dream job. But he’d just fallen in love and wasn’t so sure he really wanted it. It took a weekend of soul searching to realise that this would be the experience of a lifetime.

From covering India’s endearingly over-the-top response to the death of cricketing legend Don Bradman to being the only Australian journalist in Afghanistan on September 11 2001, Lost in Transmission is Harley’s exciting, often moving, funny and disarmingly honest account of the three years he spent, lurching from one hair-raising misadventure to the next, reporting from one of the most exotic and, as events unfurled, alarming corners of the planet.

Shifting effortlessly between the serious, the sublime and the ridiculous, this is the story of a stranger at something of a loss in an even stranger land – a young man struggling to comprehend and comment on life in a part of the world that never quite makes sense…

PS Jonathan Harley is the man that Sarah Macdonald (above, author of Holy Cow) went to India for!

Beijing Tai Tai is a collection of witty observations on Beijing expat life, from a mother, wife and woman intent on capturing her love-hate affair with China. Intensely personal, at times a little controversial, it’s a rollercoaster ride of honesty and openness as a mother and wife (tai tai) juggles suburban family life in urban Beijing. Presented in a series of column-like snippets – on topics ranging from the consumption of bull testicles to the life-altering experience of walking the Great Wall – it talks of both the challenging lows and intense highs of expat life in a country on the brink of great change.

It’s a book about bad hair and silk markets as much as it is about China’s quest to stay true to its ancient origins, while the world sucks this complicated country headlong into the future. Beijing Tai Tai is a book for anyone keen to learn more about this diverse and culturally rich country. It’s for anyone, from anywhere, who knows what it’s like to fall in love, explore new worlds and live with challenges. Both funny and deeply sad, its content epitomises the dichotomy that typifies China.

Leanna Adams moved to China in 2006. What she found were squat pots, plates of pig’s feet, wildly curious Chinese people and life-altering experiences.

Pretty Woman Spitting is a kind of love letter to China. Adams chose the title after hearing a particularly guttural noise (spitting is commonly heard all over China) and turned to find a beautiful woman in a delicate yellow frock hocking up a big one. Pretty Woman Spitting is the book Adams wanted to read before she moved there, filled with loads useful information like where to go to the bathroom and how you shouldn’t hug Chinese men after they fix your toilet.

While living in the countryside teaching English and American Culture, even the most basic issues of hygiene presented complicated dilemmas for Adams. The reaction of the rural Chinese – who had seldom if ever seen a Westerner – to a curly-haired American woman ranged from pointed curiosity to outright inappropriate touching.

The book is part memoir, part travelogue and a compelling and often hilarious account of an evolving Chinese society and a woman at a crossroads. Adams was nearly robbed, held her co-worker’s hand as she died in a filthy, smoke-filled hospital, bonded with many of her three hundred students and left part of her heart in Wuhu, China.

Adams’s contrasting experiences highlight the differences that make the two cultures unique and the similarities that make all people human.

Shark’s Fin and Sichuan Pepper: A sweet-sour memoir of eating in China

This is the story of an English girl who went to China to learn the language, but whose love of food led her down a very different path…

Award-winning food writer Fuchsia Dunlop went to live in China in 1994, and from the very beginning vowed to eat everything she was offered, no matter how alien and bizarre it seemed to her as a Westerner. In this extraordinary memoir, Fuchsia recalls her evolving relationship with China and its food, from her first rapturous encounter with the delicious cuisine of Sichuan Province, to brushes with corruption, environmental degradation and greed.

In the course of her fascinating journey, Fuchsia undergoes an apprenticeship as a Sichuanese chef; attempts, hilariously, to persuade Chinese people that ‘Western food’ is neither ‘simple’ nor ‘bland’; and samples a multitude of exotic ingredients, including dogmeat, civet cats, scorpions, rabbit heads and the ovarian fat of the snow frog. But is it possible for a Westerner to become a true convert to the Chinese way of eating? In an encounter with a caterpillar in an Oxfordshire kitchen, Fuchsia is forced to put this to the test.

From the vibrant markets of Sichuan to the bleached landscape of northern Gansu Province, from the desert oases of Xinjiang to the enchanting old city of Yangzhou, this is an unforgettable account of the world’s most amazing culinary culture.

What do you think? Are you feeling inspired to take a trip somewhere in Asia?

Have you got any standout books that have left an impression on you?

What inspires you to travel and explore?