Language Learning Stories
with Ingrid Truemper from
Second Half Travels

Language Learning Stories
with Ingrid Truemper from
Second Half Travels

Ingrid is living such an interesting and language varied life! Raised bilingual in the US in German and English, Ingrid Truemper was bitten early by the travel bug and has visited 57 countries. She retired early at 43 from software engineering to devote herself full-time to her passions for language learning and travel.

Ingrid’s lifetime goal is to speak seven languages to at least B2 level. She’s over half-way there, speaking German, Spanish and Russian, with Portuguese her next challenge.

I loved reading her responses – her passion for languages and learning is so evident. There are also some fantastic language learning tips in here too!

Thank you to Ingrid for sharing her story for this interview. I hope you enjoy!

I read that your goal is to learn a new language to at least conversational (B2) level every two years. Can you explain how this goal came about and where you are on that journey?

I’ve always been fascinated with languages, and my lifelong dream has been to be a polyglot. B2 is my minimum goal, but for easier languages for an English speaker, like Spanish or Portuguese, my intent is to reach C1. For more difficult languages like Russian or Chinese, I’d be content with B2.

I have native fluency in English and German, although I have to work to maintain the German with few opportunities to speak it here in the States. Modern German is also constantly changing; I try to keep up with the latest slang by watching TV and movies and chatting with relatives who live there.

I’m also C1 in Spanish. My Portuguese has dropped back to beginner level after years of neglect, but I plan to spend next year focusing on it. I recently learned basic Russian for a trip, and loved my time there so much that I’ve decided it’ll be my next language after Portuguese! 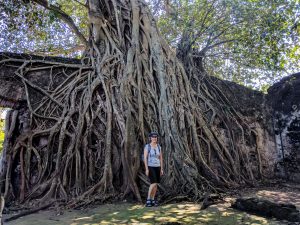 Ingrid traveling around Veracruz, Mexico, after a stint studying Spanish in Puebla

Your current focus language is Spanish. What drew you initially to Spanish?

It’s funny because as a child I always wanted to learn French, but my parents insisted on Spanish since we lived in the American Southwest where it’s commonly spoken. I now greatly prefer Spanish to French due to my love for Latin America and Spain.

At 15, I spent a summer on a language exchange in Veracruz and fell in love with Mexico. My love affair with Mexico continues, especially with its gorgeous colonial cities, and I visit at least once a year.

Mexican Spanish is my favorite Latin American variant of the language. It was the accent I learned at school growing up in Texas, and for me, it remains the clearest and easiest to understand. Additionally, the abundance of Mexican movies and TV shows makes it easy to practice listening comprehension at home.

I’ve also studied in Spain and love the culture and diversity of accents and languages. Due to my studies in both regions, I’ve developed an odd mid-Atlantic accent that’s a hybrid of European and Mexican Spanish. My Mexican friends joke that I speak gachupilango, from gachupín (Mexican slang for Spaniard) and chilango (a native of Mexico City).

Where have you studied Spanish? Have you been on any language learning trips?

At 15, I spent a summer in Mexico on a language exchange, and at 16 went on a yearlong exchange to German-speaking Switzerland. With four national languages, Switzerland is proudly polyglot; most of the people I met spoke three or more languages. I was inspired by the multilingual culture as well as the high standard of language instruction in schools. The US is sadly far behind in this respect!

As an adult, I’ve attended six Spanish schools in four countries: Argentina, Uruguay, Mexico, and Spain. You could say I’m a language school junkie! As a backpacker more than 20 years ago I also took a month-long intensive Arabic course in Cairo. Speaking a little Arabic when traveling in Egypt goes a long way towards helping you negotiate prices and connect with the locals.

Have you always been interested in languages and travel or only more recently, since you ‘retired’ from your profession?

My parents emigrated to the US from Germany, and although I was born in the US German was my first language. I studied Spanish at school and French at university. After university, I took three gap years to work in the UK and travel and took courses in Arabic and Italian along the way. During grad school, I also informally studied Portuguese and spent a summer in Brazil getting to a conversational level.

However, once my professional life started I had limited time and energy for language learning. I often traveled to Spanish-speaking countries on my vacations, occasionally doing informal tutoring, and tried to immerse myself in the language as much as possible through conversation with the locals.

Since taking early retirement almost three years ago, I’ve tried to make up for lost time by devoting myself to language learning and travel.

What have you learnt about yourself through studying languages?

I learn best in a context that’s personally meaningful, whether conversing with friends who are native speakers, listening to a podcast I enjoy or watching an addictive TV series in my target language. I don’t do well memorizing random vocabulary lists.

My learning accelerates when I use a language actively by speaking and writing rather than passively with listening and reading.

What tools, resources or techniques do you rely on to study languages?

I love language schools for the instruction but also for the social aspect and the opportunity for immersion into the culture.

At home, I often do self-study with grammar books I select on Amazon based on their reviews. For conversation, I meet at least weekly with teachers on iTalki. An added side benefit of iTalki is that I have become friends with several of my instructors. I’ve met up in person with teachers in Spain, Mexico, and Ecuador!

When at home, I also attend language Meetups for Spanish and German to practice speaking and make new friends.

Watching movies and TV shows in my target language really helps my vocabulary and listening comprehension. It can also provide an interesting window into the local culture. I’m thrilled about the expansion of international programming on Netflix and Amazon Prime, and frequently publish lists of my favorite shows on my website.

I also love language-learning and native-speaker podcasts for Spanish and German and listen to them frequently at the gym or to pass time when traveling.

YouTube is also a great free resource; you can check out some of my favorite Spanish YouTube channels here.

Have you been able to use your language skills through your career or travels?

Unfortunately, I wasn’t really able to use languages in my former career as a software engineer, but in my new career as a blogger I write about language learning and resources.

Learning a language enriches my travels considerably. I find that connection to the local people and culture to be my favorite part of traveling. As I’ve gotten older, I’ve realized I really prefer slow travel: spending an extended length of time in one place and deeply exploring the culture and language.

What advice would you give to aspiring Spanish, Russian and German learners?

For Spanish, definitely take advantage of the plethora of incredible language schools in Latin America and Spain (see my post on how to choose a Spanish school). Spanish learners are also spoiled with so many great learning resources on YouTube, Netflix, and Amazon Prime.

German is more challenging, and I definitely recommend a solid grounding in the grammar, preferably in a classroom setting if you haven’t been exposed to a language with cases before.

Russian has been my side project this year due to my trip there. It’s a whole new level of difficulty with its Greek-based alphabet and words chock-full of consonants. I discovered many great free resources like learning apps, Memrise, and YouTube. For this trip, my goal was just to learn to read Cyrillic and some survival phrases, but I plan to study it in more depth later.

Do you have any tips for learning multiple languages at once?

I definitely have a tendency to get languages mixed up, so to save my sanity I’m trying to learn only one language to proficiency at a time. It also helps if they’re very different, like Russian and Spanish. I’m a bit nervous about adding Portuguese into the mix due to the impact it might have on my Spanish. I’m going to try to compartmentalize them in my brain by not studying both on the same day.

What are your language plans for the future?

Portuguese is my next objective, and I plan to focus on it for a year or two until I reach C1 while maintaining my Spanish and German.

I’m attending a well-known language school, Caminhos, in Rio de Janeiro next year for three weeks, with three additional weeks of travel in Brazil. Next, I’d like to try a school in Portugal, most likely in Lisbon. As mentioned above, my Spanish is an odd mixture of European and Latin Spanish, and I can see my Portuguese ending up the same way!

Next year (2019) I’d also like to attend a polyglot event for the first time. I’m planning on going to LangFest in Montreal in August. In future, I also want to check out the Polyglot Gathering and Polyglot Conference, both of which are held annually at different locations in Europe.

My lifetime goal is to speak seven languages to at least B2 level.

After Portuguese, which will be language number four, I’d like to try the challenge of a more difficult language like Russian. On my recent trip I found a language school in St. Petersburg I really like, so I’m already planning my return! I’d also love to eventually tackle an Asian language like Chinese, Japanese, or Thai.

A BIG thank you to Ingrid from Second-half travels for this interview!

Are you learning Russian, Portuguese or Spanish? I hope you got some great insight into what resources and strategies Ingrid is using to achieve her goal of 7 languages.

Please leave us a comment below with any questions. We love hearing from you.