8 books to read for an
insight into China

8 books to read for an
insight into China

8 books to read for an insight into China

I love reading and especially true stories and historical fiction – they reveal so much about a country, its culture, language and traditions.

There are many fantastic books on China, but I’ve tried to narrow these down to my favourite 8 books to read for an insight into China.

For this post, I’ve focused on memoirs and biographies (probably my all-time favourite genre!) and included one non-fiction history book.

There are links to Book Depository online for the majority of the books I’ve listed below (except for Chinese Lessons – I’ve included the picture I took of my library book!) 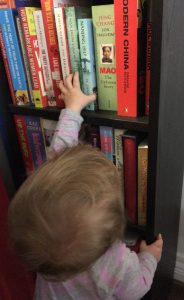 Shark’s Fin and Sichuan Pepper: A Sweet-Sour Memoir of Eating in China

Fuchsia Dunlop is inspiring in so many ways. As a Chinese learner, it is fascinating to read about her language studies in China. This book is a part language, part travel and part food memoir. Fuchsia first moved to China in 1994, settling in Chengdu to undertake Chinese studies. She enroled at the Sichuan Institute of Higher Cusine becoming the first foreigner to do so and also learnt Sichuanese, the local dialect.  She has also written cookbooks on Sichuan style cooking and Hunan style cooking.  It’s a super read!

Falling Leaves: The Memoir of an Unwanted Daughter

I first read this book when I was in my early 20s and it has left such an impression. Adeline was born in 1937 into an affluent family in northern China. She suffered terrible abuse at the hands of her step-mother and ended up moving to Hong Kong and the US.

Recommended for readers interested in pre WWII China and the ‘human’ story of Chinese people of that era.

Chinese Lessons: Five Classmates and the Story of the New China

I found this memoir at my local library and I really enjoyed reading about John’s experiences studying Chinese in Nanjing in 1980. He even attended the university I went to – Nanjing University. John went onto have (and continues to have) a long career as a journalist, based in China for much of his career. I think what I liked most about this book was it took stories of his fellow students from the 1980s and time when John was an exchange student, and then John met them around the world (one ended up in Italy) to find out where they are and what they’re doing. It also looked at their pasts and how the cultural revolution impacted their lives so much as children and that of their parents.

Recommended for you especially if you have a Nanjing connection and are interested in life as a student in the early 1980s. 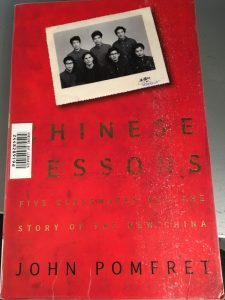 This book is BIG, very big! And can be a bit intimating. I admit I have not read it all.  But what an insight into a huge figure in China (and the world’s) 20th Century history. Mao continues to dominate the lives of Chinese people – his portrait is literally everywhere, even with all the atrocities that were committed when he was the leader.

Who doesn’t love a short book on the history of a country! I was a convert when I saw how many pages it has (153 pages!).

I learnt a lot in a nice and condensed book. “This Very Short Introduction offers an indispensable starting point for anyone who needs to quickly know the themes and controversies that have shaped modern China”.

Recommended if you are interested in Chinese history and want a short, sharp read.

This book captures the stories of three generations of women in China. It covers a lof historical ground from Mao’s impact on China and the cultural revolution, and life as a communist. The book exposes these historical events from the perspective of the women it’s about.

Recommended for readers interested in how the arrival of Communism in the 20th Century affected women in China.

The Battle Hymn of the Tiger Mother

I read this book last year, as a new Mum and it brought home a lot of truths. How hard to push your kids? What passions do you let them pursue organically and what do you ‘encourage’ and ‘force’? Is there a western way and a Chinese way? Even though this book is about an American family, they are Chinese-American and this delves into another aspect of the kids’ lives. At some parts of the book I was so shocked by Amy’s decisions and her hardness, but as the saying goes ‘each to their own’.

Recommended for parents and those questioning their parenting habits or how they were raised.

The one-child generation affects people exactly of my age. The one-child policy was introduced in 1979, one year before I was born. I met Xinran at a presentation and book signing in Melbourne a few years ago, so I feel like I kind of ‘know’ the author! Read this especially if you are interested in the generations of Chinese people who are now in their late 30s and were born when this policy was first introduced.

“Within their families, these kids often are revered as ‘little emperors’ and ‘princesses’, although such cosseting can come at a high price: isolation, confusion and an inability to deal with life’s challenges”.

Recommended if you are interested in the younger generation in China and the impact of the one-child policy.

Please feel free to add in your books to read for an insight into China or books you’d recommend I read.

I look forward to seeing your recommendations!